Density control when mixing cement slurry on the fly 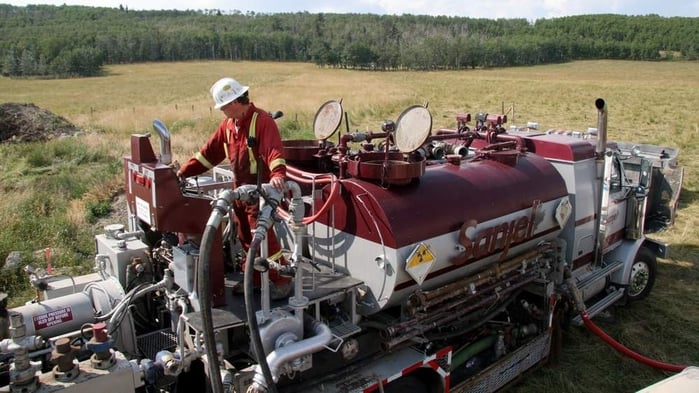 Anyone who has been a cementer and mixed cement for a large and important cement job on the fly knows and understands the stress and pressure you face during a job like that.

Basically, the whole rig is doing nothing but waiting for you to finish your job successfully before they can continue their work.

So, you better be ready to pump when you get the nod, and if the density is supposed to be 15.8 ppg (pounds per gallon), it better be - all the way!

Keeping the density steady can at times be difficult, though. Let's investigate the usual suspects.

When bulk supply just finishes a silo and changes to a new one, the density tends to jump a bit. If your mixer gets partly plugged up, damp dry cement can do this or rocks in the cement will plug things partly or fully. Even things you do as a cementer can cause trouble, for instance changing too much and too fast water supply rates, or trying to empty the surge can towards the end of the job. Letting your mixing tub overflow or run dry can lead to air in the slurry, loss of suction for your centrifugal and all goes haywire. Some chemicals also tend to easily foam-up the slurry. If that happens, everything is difficult.

Sometimes you just need to stop, dump all the fluids and start over again. It is hard to get rid of foamed-up cement slurry. All this gets harder and trickier with a small slurry mixing tub. There are a number of reasons why good and tight density control sometimes is difficult.

Now, is that really such a big deal? Well, not always.

For the simple slurries, often at the top holes, you'll be fine within a margin of +/- 0,3-0,4 ppg. At the deeper casings, however, the density control is vital to deal with slurries designed with no free water, very low fluid loss, higher temperatures with right angle setting, and so forth.

Low density could lead to more free water, settling and larger fluid loss, as well as longer thickening time. High density can lead to excessive pump pressures and shorter thickening times. In some cases, that could be catastrophic.

I remember one case where we had a slightly high density for the first few bbl of slurry on a 7” liner job, and we ended up cementing up the drill pipe on top of the liner. NOT fun! There were several things that went wrong that day and led to the disaster. The extra high density mixed in those few barrels at the beginning of the job was found to have cut the TT (Thickening Time) from 4-1/2 to 3-1/2 hrs., just enough to get the pipe stuck. It took them 30 days to wash over the drill pipe and get back into the 7” liner. Make sure you keep the correct density on those critical jobs.

So, what is the easiest way of avoiding this potential problem?

It pays to have  a great cementer, a big mixing tub and some of the automatic density control systems. But the only way to be in total control of the density is to batch-mix the cement slurry. You cannot do this on the very large jobs, but for most of the crucial ones a batch mixer of 100 bbl will do. This is equipment that should be available to you without to much fuzz. Just don’t let the cementer convince you to mix on the fly anyway - he just wants to avoid the extra work of cleaning the batch mixer.