This is how we dealt with a leaking liner lap

Today I’ll like to share with you a case history within a well integrity application. Several of our articles on this blog have focused on the importance of doing proper planning before mobilization. I hope this story will give you insight into how we execute all stages in operation from designing a suitable solution, recipe design, execution and to end-of-well reporting.

We are situated on a platform in the Norwegian sector of the North Sea. During pressure testing of a near completed injection well, a leak has been found. The leak point was located with the use of an acoustic log to the 7-in liner lap. The situation must be rectified as it is not possible to hand the well over without ensuring full integrity. We are called out to seal the liner lap and reestablish the integrity of the well.

This is the challenge we are facing: We are offshore on a fixed platform in the Norwegian sector of the North Sea. A water injector failed the final pressure test before it was to be perforated and put on-line. It is not a large leak, only 1.5 to 3 lpm at pressures from 150 to 340 bar.

Using an acoustic log, the leak was identified to be at or in the 7-in liner lap inside the 9-5/8” casing. The liner packer is not sealing as it should and allows fluid to pass. The required pressure test is to 345 bar. 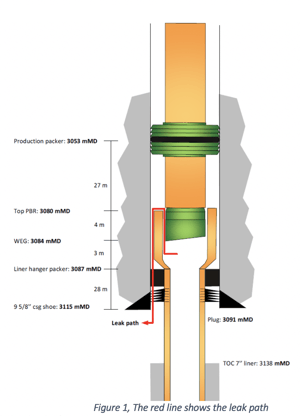 The client has few options. Running a straddle packer is possible, but very expensive and will lead to reduced ID and limit the access to the reservoir. Cement will be very difficult if not impossible to squeeze into such small leaks. Besides, it will easily be mixed with- and thinned out by the brine. Using resin will be a good solution, but the challenge is how to get it to the right place. A rig or CT is not available, so a different delivery method must be found.

There is no doubt - ThermaSet can seal the leak if we get it to the right place. To get sufficient intact volume of ThermaSet to the critical position in an effective enough way to seal the leak is the most challenging undertaking in this case.

Our objective was to plug the leak in the liner hanger with resin and leave the bore of the well intact and open.

A typical scope for us in this type of operation is as follows:

After designing the delivery solution and agreeing with the customer, we optimized a recipe for this application and performed lab testing for stability, rheology, setting time and compressive strength development as well as contamination tests with the two brines.

The delivery was to be done with an extended dump bailer on wireline allowing for a volume of 185 L delivered to the target depth.

To protect the 7-in liner, a bridge plug was to be set just inside the liner. A first run with the bailer would dump heavy (1.7 SG CaBr2) brine on top of the bridge plug to protect it from the ThermaSet and enable the retrieving tool to latch on and pull out the bridge plug after the job.

The ThermaSet resin recipe was designed at 1.3 SG to balance between the heavy brine on top of the bridge plug and the lighter brine (1.06 SG NaCl) in the well. ThermaSet is immiscible with brine (and any water-based fluid) so it was expected that the delivery would be possible with very little intermixing of fluids in the interfaces.

After dumping the heavy brine, the well was pressured up to squeeze away some of the brine so that the top of the heavy brine would be precisely at the leakage point at the liner hanger top. 185 L of ThermaSet was dumped at the interface, the bailer was pulled out, and pressure was applied to squeeze away the ThermaSet. It was important not to over-displace and open up the leak path again, so the plan was to leave around 1/3 of the ThermaSet volume inside the liner.

The recipe allowed for over 18 hours curing time, so there should be enough time to run in and pull out the bridge plug after placement. The plan was to release the bridge plug and allow the heavy brine and remaining ThermaSet to drop by gravity to the bottom of the 7-in liner where it would set up, but not be to any hindrance for future operations or the well performance.

A detailed program was created together with the operator. The following was our plan for execution: 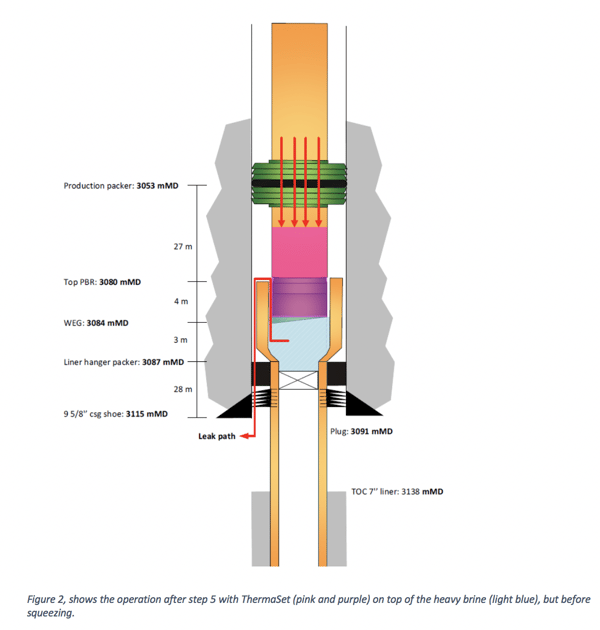 - after the heavy brine was in place on top of the bridge plug:

The job and Result

The job was done according to plan; however, the bridge plug was not possible to latch onto (it was set with the neck was sticking out into a part of the well with very large ID and we could not latch onto it). Hence the remaining ThermaSet cured and it had to be milled out with CT. After doing this, latching onto the bridge plug was successful, it was released and pushed down to the 7” rat hole. The well was then successfully tested and could be completed according to plan. 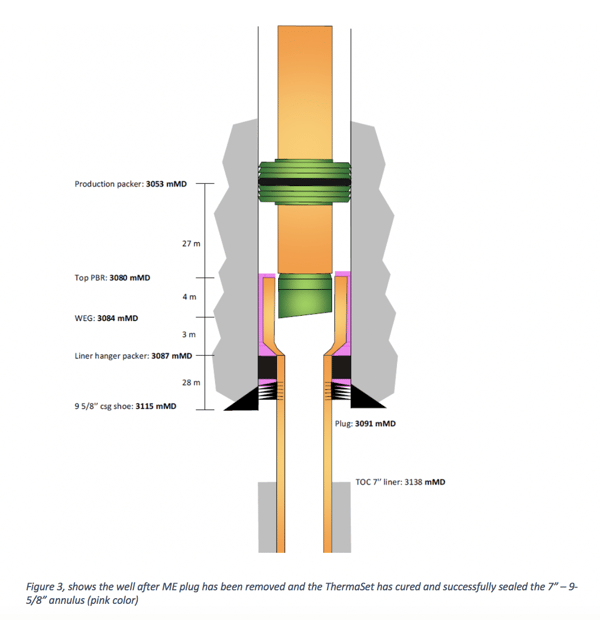 More to read: Dealing with micro-annuli in casing cement

The last couple of months we have covered several topics within the Well integrity, and I believe around ten articles have been elaborating on subjects related to sustained casing pressure (SCP).

This is one of the articles which you also can read to learn more: 5 keys to the successful remediation of sustained annular pressure.

ThermaSet can be mixed at higher densities and long setting time enabling a stable resin to be dumped at depth using a bailer on wireline.