Plug and abandonment: Different materials for oil and gas wells 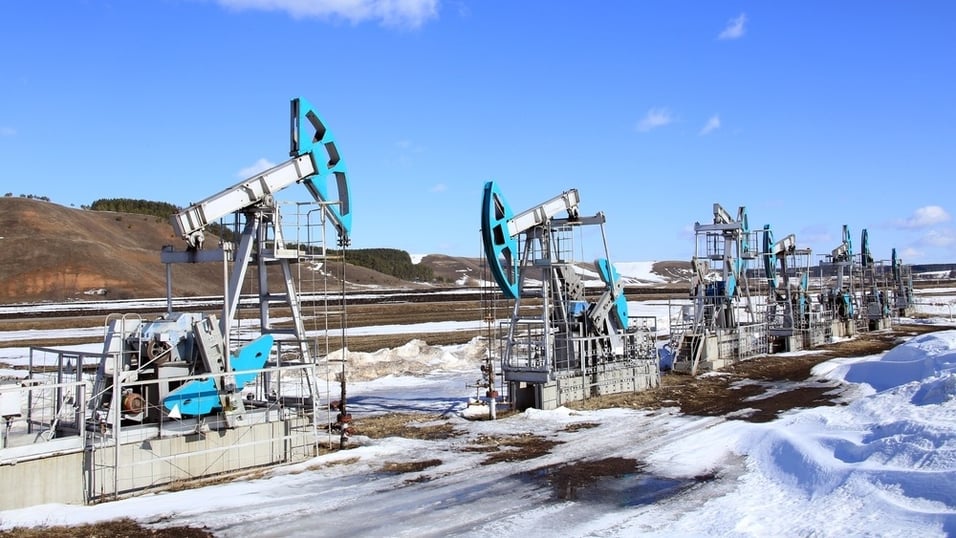 In our previous article, I promised to address the doubts of the readers around the material that could be placed in the hole as a barrier for plug and abandonment, and whether those materials differ depending on time span defined for the barrier's life.

I gave you a spoiler when I told you that cement IS NOT the only material for well abandonment. So now, let's dig further into the matter.

This article was originally published 25. October 2017 by former Wellcem employee Miguel Diaz. An updated version is republished now by Svein Normann, in order to introduce this important topic to our new blog readers and followers since then:

Hopefully, you all remember that we defined the Gulf of Mexico (GoM) and the North Sea as the two more relevant places regarding the availability of detailed and comprehensive legislation that addresses the well abandonment process.

Moreover, we gave special attention to the UK offshore oil and gas organization (UKOG) (https://oilandgasuk.co.uk) series of three documents on well abandonment practices. They include a "Guideline on qualification of materials for the abandonment of wells."

Read also: Our cases "Collapse in the tubing and casing" and "Plugging a well with no mechanical integrity"

Temporal or permanent it is all the same

When we place barriers in the well to isolate formations from each other and the surface with no intention to ever re-enter the abandoned part of the wellbore, the abandonment is considered a permanent one.

Where there is an intention to re-enter, we call it temporary abandonment (typically a matter of months). Besides the timeline of the application, the only other difference between permanent and temporary abandonment is that a temporary barrier is not required to extend across the full section of the well and include all annuli.

Other than that, a temporary barrier must fulfil some functions, which we discuss below, and they do not differ from those of permanent barriers, except possibly for a relaxed timescale of required durability.

Again, the UKOG guideline defines the requirements for a well abandonment barrier to be successful, those are:

A leak is a breach of integrity which passes entirely through the barrier. Such a gap can take the form of a crack or channel and may be present from the start of placement or develop over a long or short period. Failure can occur due to debonding, dissolution or cracking.

The primary function of a permanent barrier is to provide a seal against leaks. But, the curious thing is that the guideline considers inevitable that fluid within the well will ultimately migrate past a barrier, albeit at a low rate.

Thus, appropriate barriers are those through which the rate of permeation is acceptably low. The approach taken is to require that the barrier permits leakage of fluids at the same or a lower rate than the caprock. The permeability of caprock is typically within the range of 0.001-1 micro Darcy.

But from historical industry experience, barriers of 30m (100 ft) of “good” cement (usually with a permeability of 10 micro Darcy) are performing to a level satisfying the oil and gas industry. 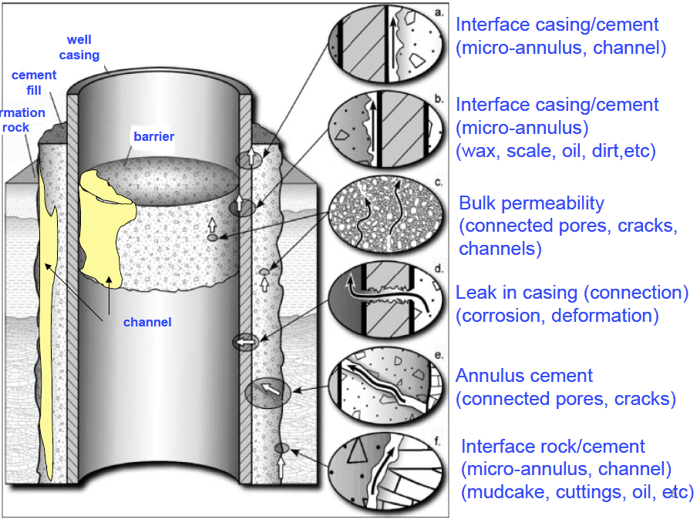 A maximum permeability of 10 micro Darcy has then become the acceptance criteria for the qualification of a cement barrier of the sort discussed above. If permeability is lower, a shorter barrier may be installed. Longer barriers could be used for more permeable materials.

Once placed, the barrier should not move, either along the wellbore or in a lateral direction. For instance, the barriers should not be pushed upwards by pressure developing below. The barrier materials are required to remain attached to interfaces to where it was installed.

Materials used for P&A should pass shear bond stress tests demonstrating what delta pressures are needed to extrude the materials out of a cylindrical cell that mimics a cased well.

The permanent barrier material should be easily placed in a wellbore at the desired depth and perform as required. Therefore, it should have appropriate properties that allow it to displace the existing fluids and form a continuous sealing medium, even when considering its inevitable contamination.

Where a barrier material undergoes a transformation from liquid to a solid, this period of change must be sufficiently short to prevent an escape of fluid and unacceptable disruption of the barrier.

Verification of the barrier placement must be possible even in deviated wells.

The barrier material should not degrade such that its sealing capabilities or position are compromised. It should be able to withstand wellbore changing conditions for ages.

Being removable is a fundamental element if the abandonment was a temporal one. The barrier should be easy to remove with existing conventional industry methods (drill bits, mills, acid, etc.). Also, if a leak through a barrier would develop, there should be a method to remove/repair it to regain integrity.

After placement and activation, the permanent barrier material will have to withstand external loadings that could vary with time, among those are:

Having read these expected requirements for a material to be considered a qualified abandonment barrier;

Cement is currently used in wells as the prime material for abandonment purposes because it is found to have similar properties to the rock that it is replacing. However, given its operational limitations, alternative materials, which offer significant advantages over cement, are being proposed and developed by the industry.

These substances, however, still don't replace cement. That's because - when compared with cement that has been used for hundred years or so - uncertainty with regards to long-term integrity of the alternative materials acts as disincentive for their use. 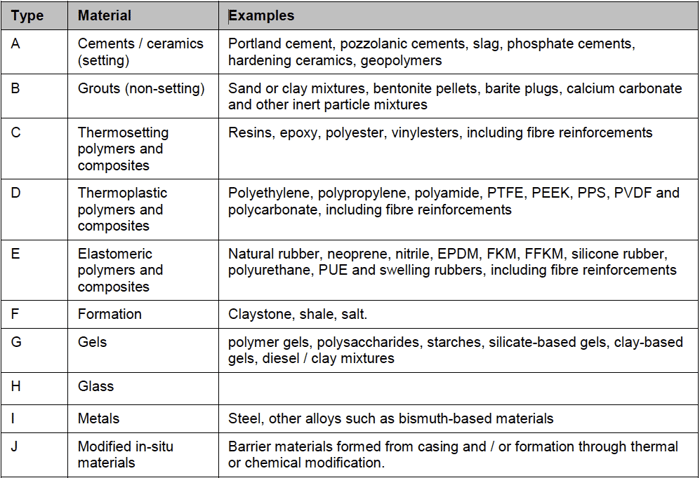 The UKOG guideline for qualification of materials then defines (see table above) a list of materials that offer characteristics that meet all the functional requirements for permanent barriers that we reviewed above.

I will give you a summary:

From the list, the two that have made more advances in recent years are Thermo-setting polymers (Group C) and the modified in-situ materials (group J).

This last case particularly refers to "Melting the cap rock," which consists of using a thermite plug to seal off the well by melting both the well components and the rock formation around them to recreate the cap rock.

This method was trialed in 2016 by Centrica in Canada claiming it could potentially reduce well P&A costs by more than 50%. 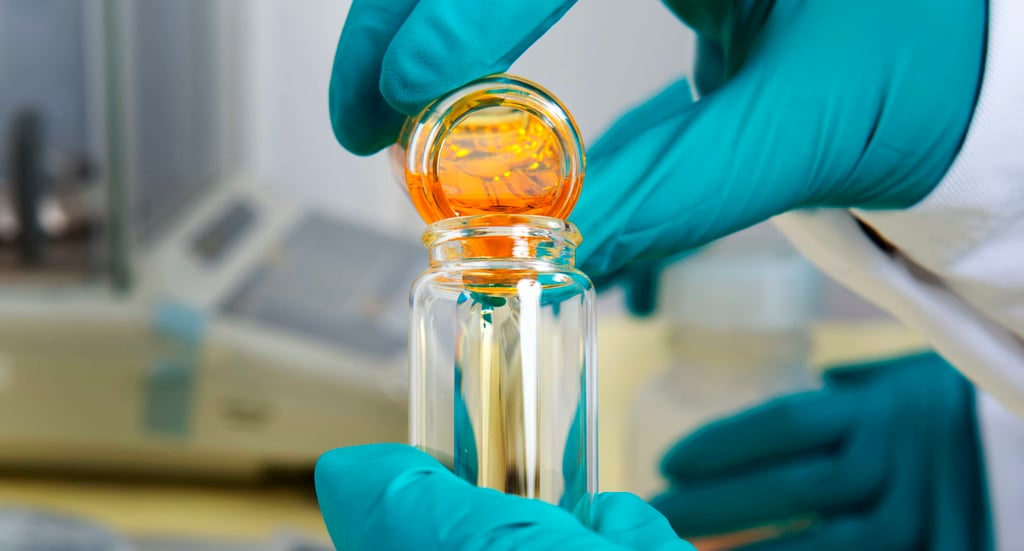 Figure 3: Throughout the transition from liquid to solid, the resin continually transmits hydrostatic pressure to the formation, i.e., there is no "Transition time" as with Portland cement.

The Thermo-setting slurries have been around for a slightly longer time. Once introduced, it was evident that resins have a lot to offer. Using the "requirements for permanent barriers" as a checklist - and with a comparison against cement in mind - the resins have:

In 2012, the first couple of cases of bull-heading abandonment were documented in the Gulf of Mexico (Charpiot & Jones, Offshore Magazin, May 2013). In the first one, a weighted resin with low-viscosity was used to abandon a well due to its ability to be placed with minimal injectivity and yet provide high-compressive strength after setting. The well represented a closed system because the platform sheared away during a hurricane.

The same year in another Gulf of Mexico-well, bubbles were coming from the annulus after an initial cut on the casing. In this case, the resin was used in a squeeze application, stopping the annular leak. Subsequently, a 50-ft (15-m) resin plug was set. The resin had a low yield point, and due to its ability to be formulated free of solids, it penetrated small cracks and micro-annuli without the risk of particle bridging.

In March 2016, the Gulf of Mexico’s first lower abandonment using resin took place. Because there was a downhole obstruction, the operator of this particular field determined that it could not reliably carry out a lower temporary abandonment with cement. Cement could have separated or dehydrated under tight spaces in the restricted flow paths, whereas resin would have had no such issues. In this particular case, dual-coiled tubing risers were used to deliver fluids from the waterline down to the mudline.

In June 2017, another interesting P&A operation was carried out in the Middle East, with a thermos-setting polyester resin. The well involved was drilled in November 1979 and in April 2017 it developed 1,100 psi of sustain casing pressure in the 4½” x 9⅝” tubing-casing annulus (TCA). At the same time, the H2S Rupture Exposure Radius (RER) for the well was reported as 63 meters to the half "Low flammable limit” (LFL) and 1049 meters to the 30 ppm concentration threshold.

As per client definition, a well is located in a populated area “if the population exceeds 20 persons residing, working, or otherwise located within the 30 ppm rupture exposure radius (RER)”. In this case, significant civilian’s structures existed within that radius; a Highway at 524 meters and a hospital at 786 meters, for instance.

The ultimate goal of the workover operation was to re-complete the well running a 4-1/2” liner inside the 7-inch liner (covering the existing perforations). But before a rig could move in and remove the existing completion, the integrity of the well have to be re-gained taking into consideration the limitations given by the pressurized annulus, H2S levels present on the formation and the well surface location.

The operation was set to be done with a 1-1/2” Coiled tubing giving the ID restrictions of the 2-7/8” completion tubing in the well. Resin was chosen as the barrier. The low viscosity allowed lower pumping pressures while placement, and the solid free nature enabled maximum penetration during the squeeze operation. (1,000 – 1,200 psi pressure limitation set for the job due to casing conditions).

Nine and a half barrels of an 88 pcf thermo-activated polymer resin was spotted without inconvenience.

The resin plug was then pressure tested and milled allowing the well to be circulated with full returns and a new 4-1/2” liner cemented in place.

The job was a success proving resins can be used for P&A and, also, it can be placed safely with one of the smaller available coiled tubing pipes in the market.

With alternatives to cement, materials for P&A now give you more options. You can choose the material that targets your specific goal and fulfills the requirements of the operation.

The next part of this article series will cover abandonment techniques (placement methods etc., including some of the new technologies that are out there already).